Jan. 30: Denver’s First Innovation Zone – How It Got Built and Early Lessons 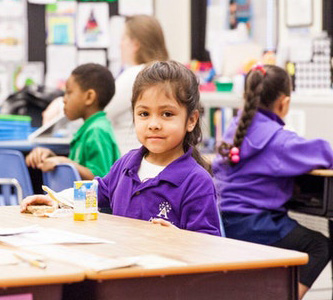 The Luminary Learning Network (LLN) was conceived by a group of principals seeking more autonomy, and its creation required significant give and take between LLN leaders and Denver Public Schools (DPS) – a district already known nationally for its efforts to ensure families and students have access to a robust array of public school choices.

The “how it got built” story and highlights from the LLN’s first 18 months of operation are chronicled by award-winning journalist Alan Gottlieb in a new case study released this month by the Gates Family Foundation. The LLN also has been profiled recently by Bridgespan and in Philanthropy Roundtable.

“The guiding vision was for radical empowerment of the educators closest to the students,” said Mary Seawell, Senior Vice President for Education with the Gates Family Foundation, which provided strategic partnership and support for the initiative. “Working with the district to answer fundamental questions – who gets to make decisions about new hires, schedules, curriculum, culture, and budget – led to some difficult conversations but also some ground-breaking outcomes.”

On Jan. 30, LLN and DPS leaders will share their takeaways and ongoing questions during a panel discussion moderated by Gottlieb and webcast online.

To join the event – in person or via webcast – REGISTER NOW

Quotes from the case study:

“Alan Gottlieb’s paper does an excellent job of describing the process by which the LLN came to be, as well as its first year of experience. It leaves us with some important questions, the answers to which will probably determine if the zone produces the improved outcomes its founders promise.”
– David Osborne, Progressive Policy Institute

“We have made a strong statement that more flexibility and autonomy is the direction we want to move. Implementing that at scale is incredibly messy, and is presenting huge challenges. I see this as an opportunity for us to learn about what I believe are the systems changes we need to be thinking about to be successful.”
– Anne Rowe, DPS Board President

“The traditional governance model of the school district – where the district is the governing entity responsible for setting all the practices, systems, and rules for all public schools, and then also is the operator of the majority of public schools – is one that has a lot of conflict in it…so it is worthwhile to think about other governance models that could allow for more continuity and more permanence, that are less subject to political vicissitudes, and that can generate innovation and quality.”
– Tom Boasberg, DPS Superintendent

“Many of the school leaders felt exposed and worried that they might be putting their jobs and careers at risk if they pushed the district too far. We saw an opportunity to help connect the dots between the situation we were observing here in Denver, and a new type of governance structure that other cities are using to push more autonomy and accountability to school leaders.”
– Mary Seawell, Vice President for Education, Gates Family Foundation

“From a school leader perspective, what is beautiful about the zone – and why the contractual relationship and independent governance is essential – is that urban education in general struggles to get out from in front of itself.”
– Zach Rahn, Principal, Ashley Elementary

“It needs to be inherent in a leader’s DNA to be entrepreneurial and a risk-taker…that really should be part of any good school leader, but certainly for someone who could work in an innovation school or zone.”
– Frank Coyne, Principal, Denver Green School